A Quick History of Fast Company 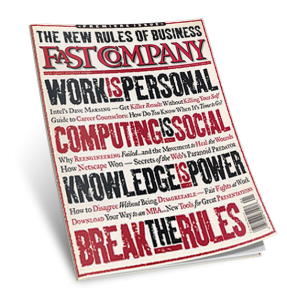 “Something is happening and it affects us all. A global revolution is changing business, and business is changing the world.”

Those were the first words in the first “Letter from the Editors” in the first issue of Fast Company. The premiere issue appeared in November 1995, and thus began the greatest professional journey of my life. Alan M. Webber and I created Fast Company because—well, because we had an awful lot of things to say about where business of work could and should be going, and a magazine gives you a big platform to speak your mind.

When we started out, we had all sorts of great expectations. “We’re not just launching a magazine,” we told anyone who’d listen, “we’re creating a movement!” Plus, we declared, “We don’t just want to publish articles. We want to shape the conversation about business at its best and the real meaning of success.” Finally, we wanted to create an organization that lived by the values and principles the magazine espoused. We wanted Fast Company to be a “fast company.”

Amazingly, the experience of launching and running the magazine exceeded even our loftiest expectations. Over the years, Fast Company won countless awards, including two National Magazine Awards, earned a passionate following among executives and entrepreneurs around the world-and became an incredible business success. After six years, an enterprise that took shape in some borrowed office space in Harvard Square sold for $340 million. Earlier this year, Fast Company was named one of the 25 most notable magazine launches of the past 25 years.

Alan and I remain exceedingly proud of our status as the cofounders of a magazine that we hope has helped to change the conversation about what business can and should become. And we both continue to campaign for a business world in which progressive and humane values lead to the creation of enduring economic value.

Here are some fun links that offer a quick history of Fast Company.

Work is Personal.Computing is Social.Knowledge is Power Our launch issue established the themes that defined the magazine. You can read it here

The Brand Called You

The article that put Fast Company on the map was the cover story of what may have been the single best issue we ever did. Tom Peters’ essay remains as relevant today as it did when it first appeared.
Here’s a link to Issue 10 (August-September 1997)

In December 1998, The New York Times discovered the power and passion of the Fast Company community. Writer Alex Kuczynski visited one of our signature Real Time live events, and filed this report from New Orleans. “At times,” she declared, “the proceedings bordered on the surreal.” That was true of the whole Fast Company experience!
You can find the article here

Once again, the mainstream media tries to reckon with the growth of Fast Company. In this long essay in The New York Times Magazine, writer Tom Vanderbilt explores the emergence of the Company of Friends, clubs of Fast Company readers that took shape around the world. Remember, not just a magazine, a movement.
You can find the article here

What Are You Working On?

That was Fast Company’s tag line during the height of the dotcom boom, and it was also the title of the last “Letter from the Editors” that Alan and I wrote. The July 2003 issue was the final issue we worked on at Fast Company, and here’s how we announced our new plans:

“We’ve traveled an amazing distance since our premier issue. We’ve evolved from a hot young maverick to a world-class business magazine. We’ve gone from a launch distribution of 100,000 copies to a total circulation of more than 725,000 and a readership of more than 3 million, making us the fastest-growing business magazine ever. Now, in the spirit of Fast Company‘s DNA, it’s time for a new round of growth and innovation. And that, we believe, takes fresh eyes, new blood, and a blast of additional energy.”
Here’s a link to Issue72

To commemorate the tenth anniversary of Fast Company, the staff put together a fantastic “oral history” of the early days. Reading it now makes me both proud and nostalgic. And it serves as an entertaining primer for anyone interested in how and why we started the magazine.
Here’s a link to the walk down memory lane.